I upgraded my home internet connection to fibre (FTTP) last October. I’m still on an 80M/20M service, so it’s no faster than my old VDSL FTTC connection was, and as a result for a long time I continued to use my HomeHub 5A running OpenWRT. However the FTTP ONT meant I was using up an additional ethernet port on the router, and I was already short, so I ended up with a GigE switch in use as well. Also my wifi is handled by a UniFi, which takes its power via Power-over-Ethernet. That mean I had a router, a switch and a PoE injector all in close proximity. I wanted to reduce the number of devices, and ideally upgrade to something that could scale once I decide to upgrade my FTTP service speed.

Looking around I found the MikroTik RB3011UiAS-RM, which is a rack mountable device with 10 GigE ports (plus an SFP slot) and a dual core Qualcomm IPQ8064 ARM powering it. There’s 1G RAM and 128MB NAND flash, as well as a USB3 port. It also has PoE support. On paper it seemed like an ideal device. I wasn’t particularly interested in running RouterOS on it (the provided software), but that’s based on Linux and there was some work going on within OpenWRT to add support, so it seemed like a worthwhile platform to experiment with (what, you expected this to be about me buying an off the shelf device and using it with only the supplied software?). As an added bonus a friend said he had one he wasn’t using, and was happy to sell it to me for a bargain price. 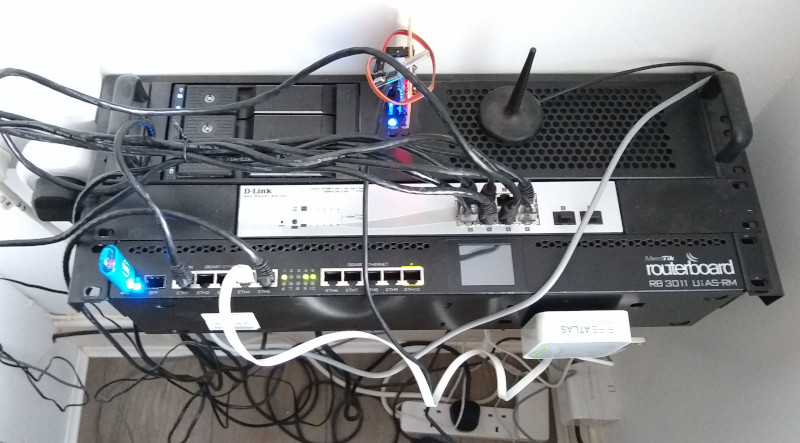 I did try out RouterOS to start with, but I didn’t find it particularly compelling. I’m comfortable configuring firewalling and routing at a Linux command line, and I run some additional services on the router like my MQTT broker, and mqtt-arp, my wifi device presence monitor. I could move things around such that they ran on the house server, but I consider them core services and as a result am happier with them on the router.

The first step was to get something booting on the router. Luckily it has an RJ45 serial console port on the back, and a reasonably featured bootloader that can manage to boot via tftp over the network. It wants an ELF binary rather than a plain kernel, but Sergey Sergeev had done the hard work of getting u-boot working for the IPQ8064, which mean I could just build normal u-boot images to try out.

Linux upstream already had basic support for a lot of the pieces I was interested in. There’s a slight fudge around AUTO_ZRELADDR because the network coprocessors want a chunk of memory at the start of RAM, but there’s ongoing discussions about how to handle this cleanly that I’m hopeful will eventually mean I can drop that hack. Serial, ethernet, the QCA8337 switches (2 sets of 5 ports, tied to different GigE devices on the processor) and the internal NOR all had drivers, so it was a matter of crafting an appropriate DTB to get them working. That left niggles.

First, the second switch is hooked up via SGMII. It turned out the IPQ806x stmmac driver didn’t initialise the clocks in this mode correctly, and neither did the qca8k switch driver. So I need to fix up both of those (Sergey had handled the stmmac driver, so I just had to clean up and submit his patch). Next it turned out the driver for talking to the Qualcomm firmware (SCM) had been updated in a way that broke the old method needed on the IPQ8064. Some git archaeology figured that one out and provided a solution. Ansuel Smith helpfully provided the DWC3 PHY driver for the USB port. That got me to the point I could put a Debian armhf image onto a USB stick and mount that as root, which made debugging much easier.

At this point I started to play with configuring up the device to actually act as a router. I make use of a number of VLANs on my home network, so I wanted to make sure I could support those. Turned out the stmmac driver wasn’t happy reconfiguring its MTU because the IPQ8064 driver doesn’t configure the FIFO sizes. I found what seem to be the correct values and plumbed them in. Then the qca8k driver only supported port bridging. I wanted the ability to have a trunk port to connect to the upstairs switch, while also having ports that only had a single VLAN for local devices. And I wanted the switch to handle this rather than requiring the CPU to bridge the traffic. Thankfully it’s easy to find a copy of the QCA8337 datasheet and the kernel Distributed Switch Architecture is pretty flexible, so I was able to implement the necessary support.

I stuck with Debian on the USB stick for actually putting the device into production. It makes it easier to fix things up if necessary, and the USB stick allows for a full Debian install which would be tricky on the 128M of internal NAND. That means I can use things like nftables for my firewalling, and use the standard Debian packages for things like collectd and mosquitto. Plus for debug I can fire up things like tcpdump or tshark. Which ended up being useful because when I put the device into production I started having weird IPv6 issues that turned out to be a lack of proper Ethernet multicast filter support in the IPQ806x ethernet device. The driver would try and setup the multicast filter for the IPv6 NDP related packets, but it wouldn’t actually work. The fix was to fall back to just receiving all multicast packets - this is what the vendor driver does.

Most of this work will be present once the 5.9 kernel is released - the basics are already in 5.8. Currently not queued up that I can think of are the following:

Overall I consider the device a success, and it’s been entertaining getting it working properly. I’m running a mostly mainline kernel, it’s handling my house traffic without breaking a sweat, and the fact it’s running Debian makes it nice and easy to throw more things on it as I desire. However it turned out the RB3011 isn’t as perfect device as I’d hoped. The PoE support is passive, and the UniFi wants 802.1af. So I was going to end up with 2 devices. As it happened I picked up a cheap D-Link DGS-1210-10P switch, which provides the PoE support as well as some additional switch ports. Plus it runs Linux, so more on that later…