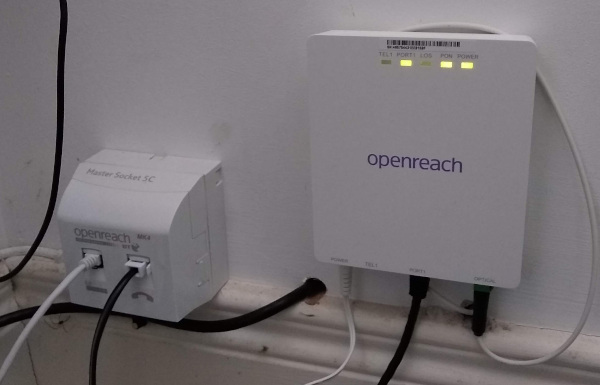 Last week I changed ISP. My primary reason was to get native IPv6 at home. As a side effect I’ve lowered my monthly costs and moved from VDSL2 (Fibre To The Cabinet/FTTC) to GPON (Fibre To The Premises/FTTP). But trust me when I say the thing that prompted the move was the desire for native v6.

First, some words of thanks to my previous ISP. I was with MCL Services who have been absolutely fantastic; no issues with service, and responsive support when I had queries. The problem was that they’re a Gamma reseller, and Gamma are showing no signs of enabling v6 (I had Daniel poke them several times, because even a rough ETA would have kept me hanging around to see if they made good on it).

What caused me to even start looking elsewhere was BT mailshotting me about the fact I’m in a Fibre First area and FTTP was thus now available to me. They dangled some pretty attractive pricing in front of me (£50/month for 300M/50M). BT have enabled v6 across their consumer network (and should be applauded for that), but unfortunately don’t provide a static v6 range as part of that. One of the things I wanted was to give my internal hosts static IPs. A dynamic range doesn’t allow for that. So BT was a no.

Conveniently enough there’d been a thread on the debian-uk mailing list about server-friendly ISPs. I’m not looking to run services on the end of my broadband line - as long as I can SSH in and provided a basic HTTPS endpoint for some remote services to call in that’s perfect - but a mention of Aquiss came up as a competent option. I was already aware of them as I know several existing users, and I knew they use Entanet to provide pieces of their service. Enta are long time IPv6 supporters, so I took a look. And discovered that I could move to an equivalent service to what I was on, except over fibre and for cheaper (because there was no need to pay for phone line rental I wasn’t using). No brainer.

So last Thursday an engineer from Openreach turned up. Like last time the job was bigger than expected (I think the Openreach database has just failed to record the fact the access isn’t where they think it is). Also like last time they didn’t just go away, but instead arranged for another engineer to turn up to help with the two-man bit of the job, and got it all done that day. The only worrying bit was when my existing line went down - FTTP is a brand new install rather than a migration - but that turned out to be because they run a new hybrid cable from the pole with both fibre and copper on it. Once the new cable was spliced back in the existing connection came back fine. Total outage was just over an hour - something to be aware of if you’re trying to work from home during the install like I was. Thankfully I have enough spare data on my Three contract that I was able to keep working.

A picture of the ONT as installed is above; it’s a new style one with no battery backup and a single phone port + ethernet port. I had it placed beside my existing master socket, because that’s where everything is currently situated, but I was given the option to have it placed elsewhere. There’s a wall-wart for power, so you do need a free socket. The ethernet port provides a GigE connection (even though my line is currently only configured for 80M/20M), and it does PPPoE - no VLANs or anything required, though you do need the username/password from your ISP for CHAP authentication, which looks exactly like a normal ADSL username/password.

I rejigged my OpenWRT setup so I had a spare port on the HomeHub 5A, then configured up a “wan2” interface with the PPPoE login details and IPv6 enabled:

For the moment I’m using the old line for IPv4 (I have a 30 day notice on it) and the new line for just IPv6, hence setting defaultroute to 0. I actually end up with more IPv6 traffic than I’d expect (though there’d be more if my TV did v6 for Netflix):

I had to do a bunch of internal reconfiguration as well; I’d previously used a Hurricane Electric tunnel, but only enabled it for certain hosts (I couldn’t saturate my connection over the tunnel). Now I have native IPv6 I wanted everything configured up properly, with internal DNS properly sorted so internal traffic tried to use v6 where possible. That means my MQTT broker is doing v6 (though unfortunately not for my ESP8266 devices), and I’m accessing my Home Assistant instance over v6 (needed server_host: ::0 in the http configuration section to make it listen on v6, and stops it listening on v4. Not a problem for me as I front it with an SSL proxy that can do both). Equally SSH to all my internal hosts and containers is now over v6.

Of course, ultimately there’s no real external visible indication of the fact things are using IPv6, even for external bits. Which is exactly as it should be.