Like any conference one of the nice things about DebConf is the random interesting people you meet. At the DebConf18 conference dinner I had the pleasure of talking to Jia-Bin Huang, from Centrum Embedded Systems. He told me about how he was using Debian as the basis for his MapleBoard (mostly in Chinese, unfortunately) project, which is based on the Allwinner H3 and has thousands of shipped units. The next day I went to take a look at the website (Google Translate proved helpful), which has details of the board including full schematics of the board. I reached out to Jia-Bin to see if he was still at the conference and if he had any boards with him, but he’d already returned to Taipei. He generously offered to send me one and a few weeks later (mostly due to UK customs delays) I had an “Economy Edition” board in my hands. 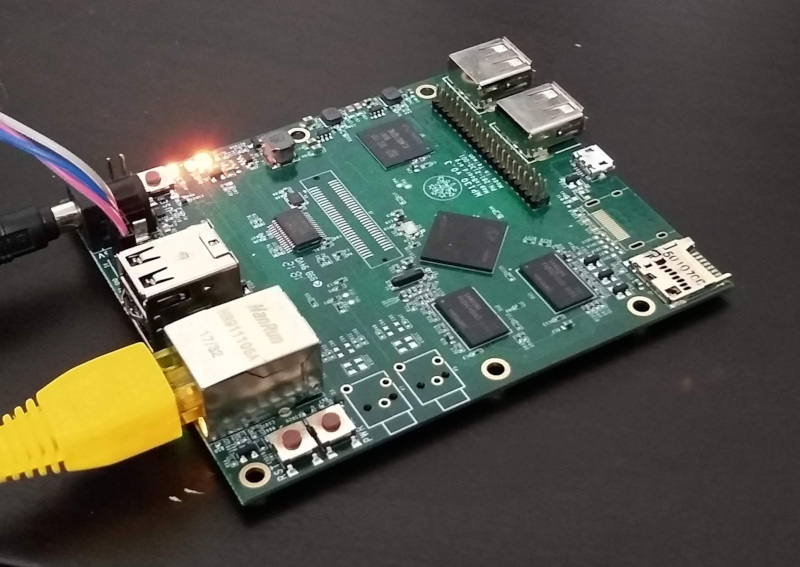 Getting up and running was simple; the board came with a pl2303 based USB serial cable, but I found it a little unreliable so ended up using my own cable. The supplied documentation was in Chinese, but the login details were clearly visible - username mpl1, password 1234. After logging in I found it was running a lightly customized Debian Stretch variant, with the following packages not from the main Debian repository:

maplewebde seems to be a web interface for interacting with the board, but it’s in Chinese so I wasn’t able to make much sense of it. I was more interested in the kernel - how much customisation had been done, and how much was already mainlined. Happily the Linux sunxi folk have done a lot of great work in getting things upstream, so although the supplied kernel was using its own drivers (largely branded Mapleboard rather than Allwinner) all the necessary pieces were in mainline. I did a little bit of cleanup of the supplied device tree configuration file, and am pleased to say that as of 5.0-rc1 a multi_v7_defconfig will build a kernel and a sun8i-h3-mapleboard-mp130.dtb file which Just Work™ on the device.

What about the board itself? I haven’t thrown a lot at it, but it feels reasonably responsive compared to some other ARM boards I’ve played with. Quad 1GHz cores and 1GB RAM is a nice enough base spec, though it is ARMv7 so 32-bit only. Unfortunately the “Economy Edition” doesn’t have HDMI on board or I’d have seen about trying to use it as a media player - the video decoding engine apparently has Free drivers based on a vdpau backend, which is pretty cool. There’s no SATA, so it can’t be pressed into service as a build machine easily. I suspect in the long run I’ll press it into service as part of my home automation setup, somewhere I need more oompf than an ESP8266 but still want low power consumption - there are a number of GPIOs conveniently brought out to a 40 pin header.

In general terms of the target market my understanding is the board is largely pitched as a development board, with Centrum being prepared to do customisations for sufficiently sized runs. The open nature of the board, and availability of good support upstream (even if it’s come from the community rather than Allwinner) certainly makes it an attractive option if you’re looking for a 32-bit ARM platform, and although I’m not aware of any option other than ordering from Taiwan at present I’ve found Jia-Bin to be helpful with any queries I’ve had. Also I quite like supporting companies that are using Debian. :) Worth a look if you’re in the market for such a thing.