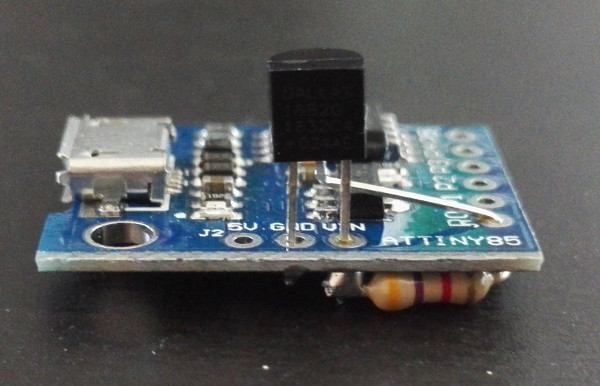 Having setup a central MQTT broker I’ve wanted to feed it extra data. The study temperature was a start, but not the most useful piece of data when working towards controlling the central heating. As it happens I have a machine in the living room hooked up to the TV, so I thought about buying something like a TEMPer USB so I could sample the room temperature and add it as a data source. And then I realised that I still had a bunch of Digispark clones and some Maxim DS18B20 1-Wire temperature sensors and I should build something instead.

I decided to try and emulate the TEMPer device rather than doing something unique. V-USB was pressed into service and some furious Googling took place to try and find out the details of how the TEMPer appears to the host in order to craft the appropriate USB/HID descriptors to present - actually finding some lsusb output was the hardest part. Looking at the code of various tools designed to talk to the device provided details of the different init commands that needed to be recognised and a basic skeleton framework (reporting a constant 15°C temperature) was crafted. Once that was working with the existing client code knocking up some 1-Wire code to query the DS18B20 wasn’t too much effort (I seem to keep implementing this code on various devices).

At this point things became less reliable. The V-USB code is an evil (and very clever) set of interrupt driven GPIO bit banging routines, working around the fact that the ATTiny doesn’t have a USB port. 1-Wire is a timed protocol, so the simple implementation involves a bunch of delays. To add to this the temper-python library decides to do a USB device reset if it sees a timeout. And does a double read to work around some behaviour of the real hardware. Doing a 1-Wire transaction directly in response to these requests causes lots of problems, so I implemented a timer to do a 1-Wire temperature check once every 10 seconds, and then the request from the host just returns the last value read. This is a lot more reliable, but still sees a few resets a day. It would be nice to fix this, but for the moment it’s good enough for my needs - I’m reading temperature once a minute to report back to the MQTT server, but it offends me to see the USB resets in the kernel log.

Additionally I had some problems with accuracy. Firstly it seems the batch of DS18B20s I have can vary by 1-2°C, so I ended up adjusting for this in the code that runs on the host. Secondly I mounted the DS18B20 on the Digispark board, as in the picture. The USB cable ensures it’s far enough away from the host (rather than sitting plugged directly into the back of the machine and measuring the PSU fan output temperature), but the LED on the board turned out to be close enough that it affected the reading. I have no need for it so I just ended up removing it.

The code is locally and on GitHub in case it’s of use/interest to anyone else.

(I’m currently at DebConf18 but I’ll wait until it’s over before I write it up, and I’ve been meaning to blog about this for a while anyway.)