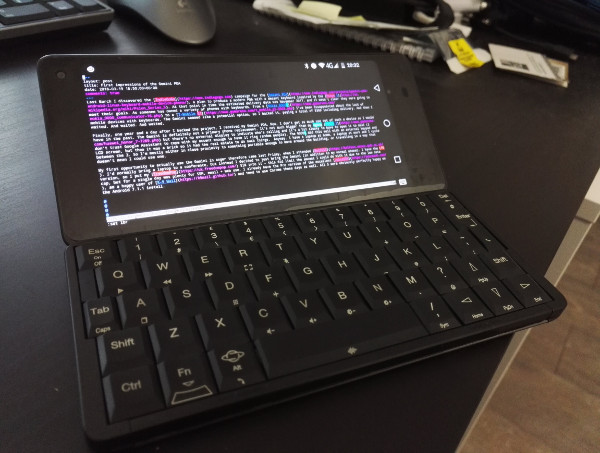 Last March I discovered the IndieGoGo campaign for the Gemini PDA, a plan to produce a modern PDA with a decent keyboard inspired by the Psion 5. At that point in time the estimated delivery date was November 2017, and it wasn’t clear they were going to meet their goals. As someone has owned a variety of phones with keyboards, from a Nokia 9000i to a T-Mobile G1 I’ve been disappointed about the lack of mobile devices with keyboards. The Gemini seemed like a potential option, so I backed it, paying a total of $369 including delivery. And then I waited. And waited. And waited.

Finally, one year and a day after I backed the project, I received my Gemini PDA. Now, I don’t get as much use out of such a device as I would have in the past. The Gemini is definitely not a primary phone replacement. It’s not much bigger than my aging Honor 7 but there’s no external display to indicate who’s calling and it’s a bit clunky to have to open it to dial (I don’t trust Google Assistant to cope with my accent enough to have it ring random people). The 9000i did this well with an external keypad and LCD screen, but then it was a brick so it had the real estate to do such things. Anyway. I have a laptop at home, a laptop at work and I cycle between the 2. So I’m mostly either in close proximity to something portable enough to move around the building, or travelling in a way that doesn’t mean I could use one.

My first opportunity to actually use the Gemini in anger therefore came last Friday, when I attended BelFOSS. I’d normally bring a laptop to a conference, but instead I decided to just bring the Gemini (in addition to my normal phone). I have the LTE version, so I put my FreedomPop SIM into it - this did limit the amount I could do with it due to the low data cap, but for a single day was plenty for SSH, email + web use. I already have the Pro version of the excellent JuiceSSH, am a happy user of K-9 Mail and tend to use Chrome these days as well. All 3 were obviously perfectly happy on the Android 7.1.1 install.

Aside: Why am I not running Debian on the device? Planet do have an image available form their Linux Support page, but it’s running on top of the crufty 3.18 Android kernel and isn’t yet a first class citizen - it’s not clear the LTE will work outside Android easily and I’ve no hope of ARM opening up the Mali-T880 drivers. I’ve got plans to play around with improving the support, but for the moment I want to actually use the device a bit until I find sufficient time to be able to make progress.

So how did the day go? On the whole, a success. Battery life was great - I’d brought a USB battery pack expecting to need to boost the charge at some point, but I last charged it on Thursday night and at the time of writing it’s still claiming 25% battery left. LTE worked just fine; I had a 4G signal for most of the day with occasional drops down to 3G but no noticeable issues. The keyboard worked just fine; much better than my usual combo of a Nexus 7 + foldable Bluetooth keyboard. Some of the symbols aren’t where you’d expect, but that’s understandable on a scaled down keyboard. Screen resolution is great. I haven’t used the USB-C ports other than to charge and backup so far, but I like the fact there are 2 provided (even if you need a custom cable to get HDMI rather than it following the proper standard). The device feels nice and solid in your hand - the case is mostly metal plates that remove to give access to the SIM slot and (non-removable but user replaceable) battery. The hinge mechanism seems robust; I haven’t been worried about breaking it at any point since I got the device.

What about problems? I can’t deny there are a few. I ended up with a Mediatek X25 instead of an X27 - that matches what was initial promised, but there had been claims of an upgrade. Unfortunately issues at the factory meant that the initial production run got the older CPU. Later backers are supposed to get the upgrade. As someone who took the early risk this does leave a slightly bitter taste but I doubt I’ll actually notice any significant performance difference. The keys on the keyboard are a little lop sided in places. This seems to be just a cosmetic thing and I haven’t noticed any issues in typing. The lack of first class Debian support is disappointing, but I believe will be resolved in time (by the community if not Planet). The camera isn’t as good as my phone, but then it’s a front facing webcam style thing and it’s at least as good as my laptop at that.

Bottom line: Would I buy it again? At $369, absolutely. At the current $599? Probably not - I’m simply not on the move enough to need this on a regular basis, so I’d find it hard to justify. Maybe the 2nd gen, assuming it gets a bit more polish on the execution and proper mainline Linux support. Don’t get me wrong, I think the 1st gen is lovely and I’ve had lots of envious people admiring it, I just think it’s ended up priced a bit high for what it is. For the same money I’d be tempted by the GPD Pocket instead.