I wrote previously about my DeskPi Pro + 8GB Pi 4 setup. My main complaint at the time was the fact one of the forward facing USB ports broke off early on in my testing. For day to day use that hasn’t been a problem, but it did mar the whole experience. Last week I received an unexpected email telling me “The new updated PCB Board for your DeskPi order was shipped.”. Apparently this was due to problems with identifying SSDs and WiFi/HDMI issues. I wasn’t quite sure how much of the internals they’d be replacing, so I was pleasantly surprised when it turned out to be most of them; including the PCB with the broken USB port on my device. 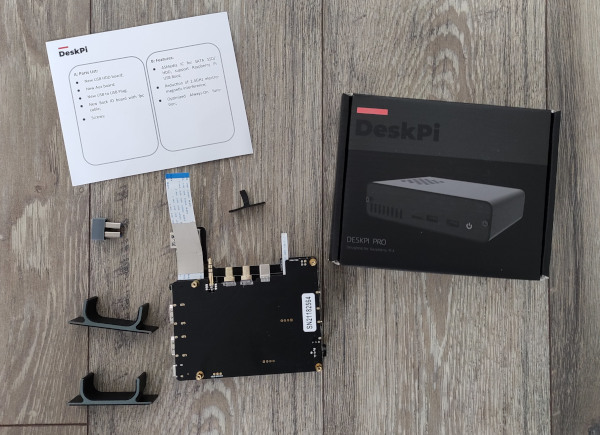 They also provided a set of feet allowing for vertical mounting of the device, which was a nice touch.

The USB/SATA bridge chip in use has changed; the original was:

and the new one is:

That’s a move from a JMicron 6Gb/s bridge to an ASMedia 3Gb/s bridge. It seems there are compatibility issues with the JMicron that mean the downgrade is the preferred choice. I haven’t retried the original SSD I wanted to use (that wasn’t detected), but I did wonder if this might have resolved that issue too.

Replacing the PCB was easier than the original install; everything was provided pre-assembled and I just had to unscrew the Pi4 and slot it out, then screw it into the new PCB assembly. Everything booted fine without the need for any configuration tweaks. Nice and dull. I’ve tried plugging things into the new USB ports and they seem ok so far as well.

However I also then ended up pulling in a new backports kernel from Debian (upgrading from 5.9 to 5.10) which resulted in a failure to boot. The kernel and initramfs were loaded fine, but no login prompt ever appeared. Some digging led to the discovery that a change in boot ordering meant USB was not being enabled. The solution is to add reset_raspberrypi to the /etc/initramfs-tools/modules file - that way this module is available in the initramfs, the appropriate pre-USB reset can happen and everything works just fine again.

The other niggle with the new kernel was a regular set of errors in the kernel log:

and a set of registers afterwards, roughly every 10s or so. This seems to be fallout from an increase in the core clock due to the VC4 driver now being enabled, the fact I have no SD card in the device and a lack of working card-detect line for the MicroSD slot. There’s a GitHub issue but I solved it by removing the sdhci_iproc for now - I’m not using the wifi so loss of MMC isn’t a problem.

Credit to DeskPi for how they handled this. I didn’t have to do anything and didn’t even realise anything was happening until I got the email with my tracking number and a description of what they were sending out in it. Delivery took less than a week. This is a great example of how to handle a product issue - no effort required on the part of the customer.