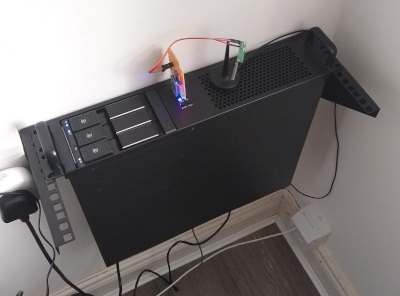 At the end of last year I decided it was time to upgrade my home server. I built it back in 2013 as an all-in-one device to be my only always-on machine, with some attempt towards low power consumption. It was starting to creak a bit - the motherboard is limited to 16G RAM and the i3-3220T is somewhat ancient (though has served me well). So it was time to think about something more up to date. Additionally since then my needs have changed; my internet connection is VDSL2 (BT Fibre-to-the-Cabinet) so I have an BT HomeHub 5 running OpenWRT to drive that and provide core routing/firewalling. My wifi is provided by a pair of UniFi APs at opposite ends of the house. I also decided I could use something low power to run Kodi and access my ripped DVD collection, rather than having the main machine in the living room. That meant what I wanted was much closer to just a standard server rather than having any special needs.

The first thing to consider was a case. My ADSL terminates in what I call the “comms room” - it has the electricity meter / distribution board and gas boiler, as well as being where one of the UniFi’s lives and where the downstairs ethernet terminates. In short it’s the right room for a server to live in. I don’t want a full rack, however, and ideally wanted something that could sit alongside the meter cabinet without protruding from the wall any further. A tower case would have worked, but only if turned sideways, which would have made it a bit awkward to access. I tried in vain to find a wall mount case with side access that was shallow enough, but failed. However in the process I discovered a 4U vertical wall mount. This was about the same depth as the meter cabinet, so an ideal choice. I paired it with a basic 2U case from X-Case, giving me a couple of spare U should I decide I want another rack-mount machine or two.

My old machine has 2 3.5” hotswap drive bays; this has been useful in the past when a drive failed even just to avoid having to take the machine apart. I still wanted to aim for low power consumption, so 2 drives is enough. I started with a pair of cheap 5.25” drive bay to dual 2.5” + 3.5” hotswap bay devices, but the rear SATA connectors ended up being very fragile and breaking off, so I bit the bullet and bought a SilverStone FS303. This takes up 2 5.25” bays and provides 3 x 3.5” hotswap bays. It’s well constructed and the extra bay has already turned out useful when a drive started to fail and I was able to put the replacement in and resync the RAID set before having to remove the old drive.

Now I had the externals sorted I needed to think about what to put inside. The only thing coming from the old machine were the hard disks (a 4T Seagate and a 6T WD RED, 4T of software RAID1 and 2T of unRAIDed backup space), so everything else was up for discussion. I toyed with an Intel i7-8700T - 6 cores in 35W. AMD have a stronger offering these days though and the AMD Ryzen 2700E with 8 cores in 45W seemed like a good option for an extra 10W. Plus on top there are several of the recent speculative execution exploits that don’t seem to affect AMD chips (or more recent Intel CPUs, but they weren’t out at the time in a low power format). Sadly the 2700E proved to be made of unobtanium; I sat with it on backorder for nearly 3 months before giving up and ordering a AMD Ryzen 2700 that was on offer. This is rated at up to 65W, but I considered trying to underclock if necessary or tweak the cpufreq settings at least.

Next up was a motherboard. The 2U case is short, but allows for MicroATX, an improvement over the MiniITX my last case needs. One of the things constraining me with the old machine was that it maxed out at 16G RAM, so I wanted something that would take more. It turns out there are a number of Socket AM4 MicroATX boards that will take 64G over 4 DIMMs. I chose an ASRock B450M Pro4, which had a couple of good reviews and seemed to have all the bits I wanted. It’s been decent so far - including having some interactions with ASRock support when I initially put an AMD 240GE (while waiting for the 2700E that was never coming) in it. I like to think of BIOS 3.10 as mine ;).

For RAM I went with a Corsair CMK32GX4M2A2400C14 Vengeance LPX 32GB (2 x 16GB) set. I’m sure I should care more about RAM but it was decently priced from a vendor I trust. At some point I’ll buy another set to bring the board up to the full 64GB, but for now this is twice what the old machine had.

Finally I decided to splash out on some SSD. The spinning rust is primarily for media (music + video shared out to Kodi etc) and backups, but I wanted to move my containers (home automation, UniFi controller, various others) over to SSD. I talked myself into a pair of Corsair MP510 960GB NVMe M.2 drives. One went on the motherboard slot and I had to buy a low profile PCIe adaptor for the other (of course they’re RAID1ed). They fly; initially I clocked them in at about 1.5GB/s until I realised the one in the add-in card was only using 2 PCIe lanes. Once I rejigged things so it had all 4 it can use I was up to 2.3GB/s. Impressive.

You’ll note I haven’t mentioned a graphic card here. I ended up with a cheap NVidia off eBay to get things going, but this is a server in a comms room and removing the graphics card saves me at least 10W of power (it was also the reason the NVMe drive only had 2 lanes). I couldn’t find an AM4 motherboard that did serial console, but the 450M Pro is happy to boot without a graphics card present, and I have GRUB onward configured to do serial console just in case.

And the power consumption? The previous machine idled at around 50W, getting to maybe 60-65W under load. I’ve cheated with the new machine; because the spinning rust is not generally in use it’s configured to spin down after 20 minutes idle. As a result the machine idles at around 36W. It hits 50W when the drives spin up, so for 8 cores compared to 2 we’re still sitting in the same ballpark. That’s good, because that’s the general case - idle here means Home Assistant operational, the UniFi controller going, the syslog container logging and so on. However the new server peaks considerably higher; if the drives are spun up and I compile a kernel I can hit 120W. However the compilation takes less than a quarter of the time - the machine is significantly faster than the old one, and even without taking advantage of the SSDs idles at roughly the same power level. I’d call that an overall win.